I really wish I’d had more of his attitude when I was a kid. I was always intimidated by the idea of trying something new or arguing my case about something I wanted. I really wanted to try out for the volleyball team when I was in high school, but I figured they’d say no because I wasn’t tall enough.

When I was 17 I scored an interview for a great opportunity at a local bank. It would have been a much better job than most of the part-time gigs kids my age were working. But everyone would have had to wait for me to total up the numbers and balance everything out at the end of the day, and that kind of pressure scared me. So I worked at a movie theater instead.

This kid? I really doubt he’ll settle for anything less than what he wants or what he feels he should have. Although that trait can be a bit trying coming from a 4-year-old who thinks he doesn’t have to go to bed at night or eat dinner without throwing his food or sit quietly while someone is on the phone, I think it’s going to serve him well as he tackles life head-on.

Obstacle course. Playing catch with Dad. Hotdogs. Peanuts. Four spoonfuls of dipping dots. Three wails about how he just had to have cotton candy. Two bites of cotton candy the people sitting next to us offered when their little guy didn’t like it. Five minutes in the bounce house. Ten minutes of screaming when it was time to leave. One tired kid. 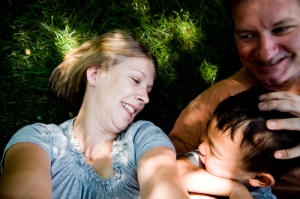 At least we have fun trying!

It’s about all he talks about most days. As he sat there pushing them back and forth, sending them flying through the air, and careening them into each other, he was giving me a play by play. Constant chatter. And I must listen intently to every word of it or he gets frustrated. So I sat for more than half an hour listening to the exploits of his racing cars and their dare-devil adventures. It’s not a bad way to spend part of a Saturday afternoon.